It’s possible the expression, keep soldiering on was created for people just like Corporal David Macdonald. In recent years, Macdonald has climbed the Himalayas, run two half-marathons and he just completed his first full marathon. He continues to serve in the Canadian Forces as a reservist, while working as the national partnerships director at Wounded Warriors Canada.

It’s not a bad list of accomplishments, considering that just six years ago, Macdonald spent three weeks in a coma at the U.S. military hospital in Germany, with no fewer than 47 broken bones in his body.

“I was involved in a vehicle roll-over on a combat patrol near the end of my tour. I broke my pelvis, I dislocated my left leg, and that had to be surgically put back in,” Macdonald said. “And I had a traumatic brain injury.”

Beyond his injuries, Macdonald says that waking up in Germany, alone, having left his platoon behind, was worse than any injury he suffered.

“[You spend] two years, training, living together, we bonded,” Macdonald said. “To find out that they were still in Afghanistan and I was halfway around the world was just devastating to hear. I wanted to be back with my platoon mates.” 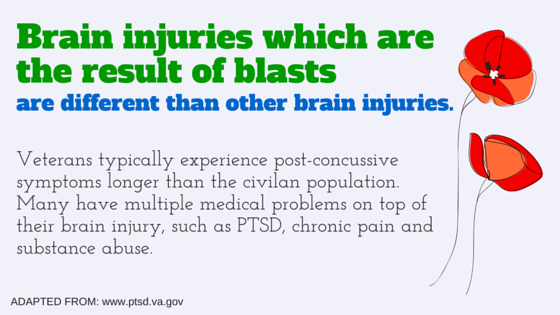 Today, Macdonald, like many injured members of the Canadian Forces, is living with effects of PTSD as well as his traumatic brain injury. He has no memory of the incident which changed his life forever. And while he is learning to accept the reality that some memories have disappeared (he says there are moments from his high school days which are gone forever), the fact that he can not remember this specific, significant moment in his life has been particularly hard to accept.

“My last memory in Afghanistan was orders the morning before the patrol,” Macdonald said.

We hear stories about the challenges members of the Canadian Forces who are living with PTSD and brain injury face. There are the facts: roughly six per cent of the Canadian military personnel deployed in Afghanistan have acquired brain injuries as a result of their service. In the U.S., this number skyrockets to 22 per cent of all military injuries. If you’re in the military, having a brain injury increases your chances of also having PTSD.

Most brain injuries acquired during military service are the result of blasts from improvised explosive devices (IEDs). Motor vehicle crashes, such as Macdonald’s, and gun shot wounds, are the other leading causes of brain injury. Brain injuries, which are the result of blasts, have different symptoms than other types of traumatic brain injuries. Typically, post-concussion symptoms for military personnel last longer than civilian concussion symptoms, and members of the military are more likely to have concurrent symptoms such as PTSD and / or addiction issues, along with their TBI.

Macdonald knows the facts. Many of the initiatives and partnerships Wounded Warriors Canada supports are about helping members of the Canadian Forces, and their families, deal with PTSD. In his current position, Macdonald handles third party partnerships, events and fundraising for partner charities.

“Last year, we gave out $1.36 million in funding to these programs and it’s just growing from there,” Macdonald said.

Programs Wounded Warriors supports include a nine day equine assisted learning program for soldiers and their spouses living with PTSD, a fly fishing program and the donation of funds to support service dogs for military members.

“Your odds of developing a form of PTSD almost double for veterans, ” Macdonald said. “There is a certain stigma, because [some] people don’t understand you can recover from it, you can go on and live a normal healthy life. It’s not incapacitation by any means.”

Over time, Macdonald has come to accept his new reality. But immediately after he recovered from his injuries, he said he needed to prove to others, and to himself, that he could still be in the military. And while he was physically fit for duty, Macdonald said he continued to suffer physical and mental pain, “stereotypical” things, he says, people dealing with trauma experience. His marriage fell apart and he pulled away from his family and friends. He contemplated, and attempted, suicide.

“I was going through things like depression and I had a lot of anxiety issues, [but] I wasn’t recognizing them.”

Then a communication came through his unit. A documentary project, March to the Top, was looking for recovering soldiers to go on a climb through the Himalayas. Macdonald, who at the time was the only soldier in his unit who was wounded, was initially a bit sceptical of the project, which was described to him as a ‘good go’.

“Half the time a ‘good go’ means that … you get to do an amazing cause and you get to meet people,” Macdonald said. “Or it can mean that you’re shovelling dirt in Northern Alberta for six months.”

It turns out, March to the Top was a legit ‘good go’ and the experience changed, and possibly even saved, Macdonald’s life. Accomplishing the feat of trekking in the Himalayas made Macdonald realize that he needed help. He learned that what he was feeling was normal, and diagnosable. It was PTSD.

“It allowed me to open up and come forward in the military and say, ‘hey I have issues, I need help.’ And that’s what started the process for me getting the help I needed,” Macdonald said.

Macdonald’s attitude is one that accepts the realities of his injuries while allowing himself to thrive. He talks about post-traumatic growth, and feeling stronger as a result of experiencing  injuries and trauma. It’s important to him that he is able to help his fellow veterans through his job, a duty he takes seriously. Until he accepted a paid position with Wounded Warriors this past February, Macdonald juggled volunteering as the provincial coordinator for Ontario while working full-time at a bank, and doing his reserve duties. The man keeps busy.

“I  don’t necessarily see my PTSD as a weakness anymore,” Macdonald said. “I used to see it more as part of my life, now I can be stronger because of it.”

Macdonald says he doesn’t know the “future” of his brain injury.  He says it can rear its ugly head at any time, and some days are harder than others.

“Something they ingrain you with in the military is never give up,” Macdonald said. “This is not a limitation, this is something that is now a part of you, but you can still excel, and you can still do amazing things.”

Meri Perra is the communications and support coordinator at BIST.